Archives & Special Collections has many archival collections that relate to 1964 Alaska earthquake. In alphabetical order by creator. Follow the links to a more complete listing of the collection contents. 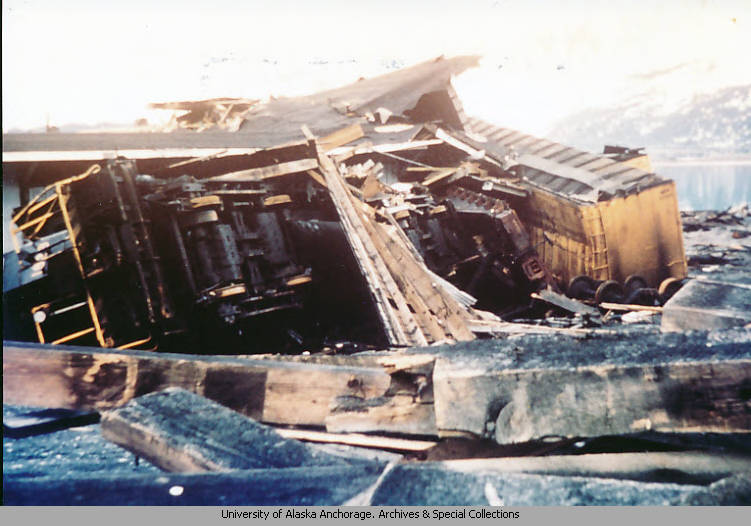 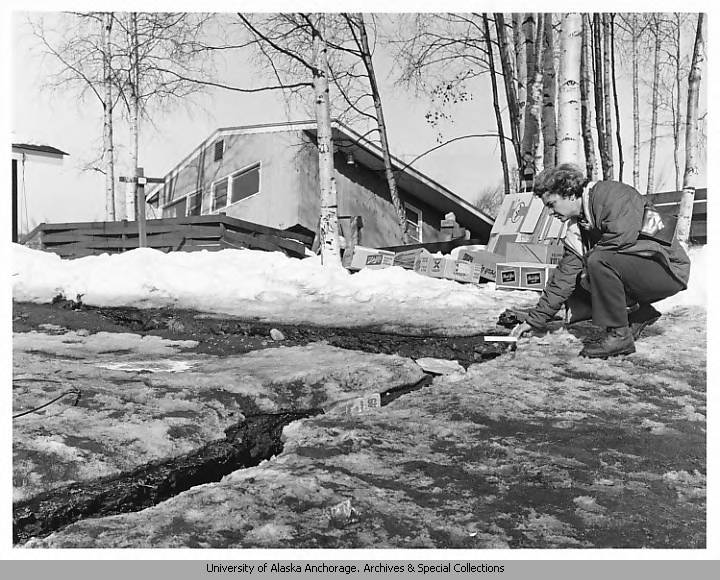 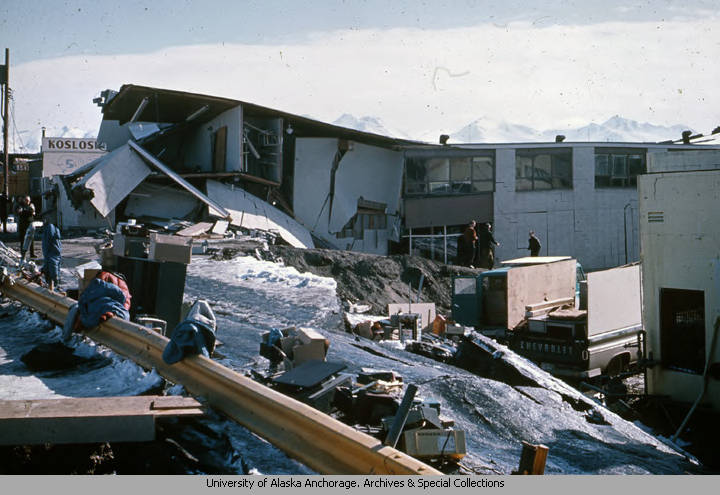 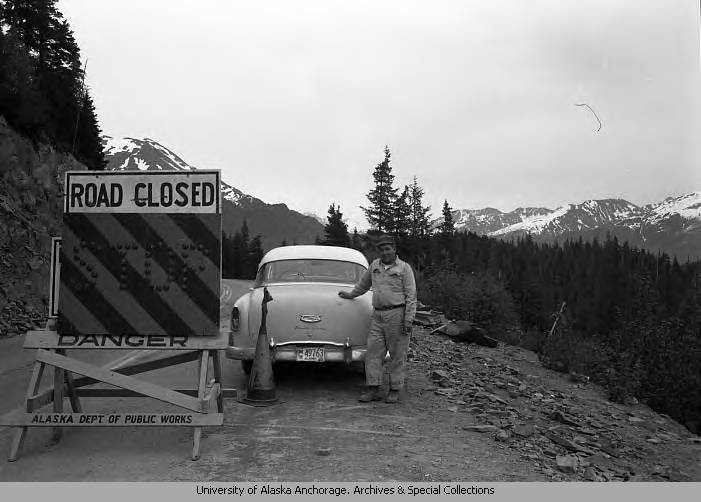 Alaska earthquake materials; 1964. EPH-0002.  This ephemera collection contains cartoons about the earthquake by Louis Bardwell, press releases from the Alaska Reconstruction Commission, and publications such as the earthquake editions of the Girdwood Yak  and the Chugach Current and the annual report of the Anchorage Independent School District, 1963-1964.

Alaska Nurses' Association collection; 1887-1995. HMC-1107. Approximately half of the material consists of administrative records, publications, and recollections. The collection does include field notes which document emergency health care provided to the victims of the 1964 earthquake.

Edna Aleshire papers; 1956-1974. HMC-1271. Primarly travel journals of a woman who lived in Alaska, however the collection includes letters Aleshire wrote to family members about her experiences during and after the earthquake. The collection also includes a list of information and recollections later compiled by Aleshire.

Alfred and Mae Bakken slides and memorabilia; 1964-1977.  HMC-0589.  Alfred (1911-1997) and Mae (b. 1915) Bakken's collection includes commercial slides of damage in Anchorage from the earthquake, especially in the Turnagain neighborhood.

David K. Brown photographs and papers; 1942-2002.  HMC-0658.  David K. Brown (b. 1920) was an engineer who was working Anchorage at the time of the earthquake as Area Administrator of the U. S. Housing and Home Finance Agency's programs.  His collection contains, among other items, an autobiography that describes his description of conditions in Anchorage following the earthquake.

Doyle and Gloria Bushman papers; 1964-2000.  HMC-0663.  Doyle and Gloria Bushman were Anchorage residents at the time of earthquake.  Their collection contains personal recordings of local radio broadcasts on the evening of the quake, slides of damage in Anchorage, on the Seward Highway, and in Seward, a videotape of an interview with them about earthquake preparedness by a Seattle television station in 2000, and a 1964 U.S. Geological Survey report on the quake.

Genie Chance papers; 1964-1977.  HMC-0084.  Genie Chance (1927-1998) was a newscaster and editorialist at KENI radio and television and at KFQD radio from 1962-1964.  She later served in the Alaska legislature as state representative from 1969-1975 and state senator from 1975-1979.  The collection contains personal and professional papers, as well as audiotapes of broadcasts from March 1964 through 1965, concerning the earthquake and recovery efforts. The collection also includes several publications on the earthquake from the U.S. Geological Survey, the U.S. Department of Commerce, and the National Academy of Sciences.

Dorothy and Grenold Collins papers; 1900-2002.  HMC-0422.  Gren Collins (1907-1992) bush pilot and outdoorsman whose collection contains, among many other items, a three-minute motion picture film that he made depicting buildings damaged in Anchorage by the earthquake.

Edwin B. Crittenden papers; 1938-2005.  HMC-0094.  Edwin B. Crittenden  was an Anchorage architect and community planner who served on the Panel of Geography for the Committee on the Alaska Earthquake, established by the Division of Earth Sciences, National Research Council. The collection contains, among other papers, reference files on earthquakes, including papers and publications of the National Research Council, the U.S. Geological Survey, U.S. Coast and Geodetic Survey, and the Army Corps of Engineers. The collection also includes photographs taken of building and damage after the Earthquake.

Russ Dow papers; 1917-1992. HMC-0396.  Russ Dow (1915-1992) was an amateur photographer who lived in Palmer at the time of the earthquake. The collection contains, among many other papers, a small number of photographs depicting earthquake damage and recovery efforts at Eklutna and Anchorage.

Robert Esterly photographs; 1964. HMC-1264-AHS. Photographs taken of damage caused by the 1964 Earthquake. Subjects of the photographs include buildings along 4th Avenue and in Downtown Anchorage, the Anchorage International Airport tower, Government Hill High School, the Seward Highway, and the Chrysler Garage on 5th Avenue in Anchorage.

Frank C. Fox photographs; 1946-1993.  HMC-0708.  Frank C. Fox was an officer and helicopter pilot in the U.S. Air Force who was serving at Elmendorf Air Force Base in Anchorage, Alaska at the time of the quake. The collection documents Fox's career as a military pilot and includes aerial photographs of damage from the earthquake.

Marion and Thomas Gregory photographs and sound recording; 1932-2002.  HMC-0809.  Thomas William Gregory (1914-2005) worked for the Federal Aviation Administration in Anchorage at the time of the quake. He was married to Marion Faye Gregory (1921-2005).  Their papers include slides documenting the earthquake in Anchorage and audio recordings of Thomas Gregory commenting on the slides and phonograph discs of original sounds of the earthquake and two earthquake songs by Blue Ervin.

Hans and Margaret Hafemeister papers; 1943-1995.  HMC-0126.  Margaret Hafemeister (1894-1995) was the Welfare Director of the Salvation Army Service Unit Committee in Seward at the time of the 1964 earthquake. Included in her papers are earthquake bulletins, correspondence, reports concerning employment, industry, civil defense, and children's behavior during the earthquake, newspapers focusing on the quake, and a narrative of people's responses to the earthquake from the Disaster Research Center at Ohio State University.

Mark Hickok papers; 1955-1991. HMC-0618. While a majority of the collection documents Hickock's involvement ith the Alaska Wilderness Council and the Alaska Chapter of the Sierra Club, the collection also contains her papers documenting the Alaska earthquake of 1964, including publications and reports, papers concerning damage to and restoration of the Turnagain neighborhood in Anchorage, and Hickok’s personal reminiscences and photographs.

Kenneth J. Huseby photographs; 1964.  HMC-0427.  This collection consists of photographs of earthquake damage in Anchorage, Portage, and Seward, mostly taken by the U.S. Army Corps of Engineers and collected by Huseby.

Robert and Wilma Knox papers; 1949-2001.  HMC-0461.  Robert and Wilma Knox were journalists who worked for a number of newspapers and magazines in Alaska and elsewhere. Among other papers, the collection contains over 300 photographs relating to the earthquake, as well as articles by Wilma Knox on the subject.

Kenneth D. Maynard papers; 1964-1967.  HMC-0172.  Kenneth Maynard is an Anchorage architect who participated in a structural building survey following the earthquake in 1964. His firm also took part in a 1966 non-structural damage survey along with the firm of Ayres & Hayakawa. This collection contains papers relating to the 1964 survey, including lists of participants, buildings to be surveyed, and posted buildings.  There is also correspondence between Maynard and the architectural firm Ayres & Hayakawa from 1966-1967 and papers relating to the 1966 survey.

Jerome F. Sheldon papers; 1885-1994.  HMC-0220.  Jerome F. Sheldon is a journalist and former news editor for the Fairbanks Daily News-Miner. His collection contains a subject file on the earthquake and on reconstruction efforts, including reports, magazine and newspaper articles and clippings, and copies of various Alaska, west coast, and national newspapers.

John Shipman scrapbook; 1964.  HMC-1018-AHS.  This scrapbook documenting the earthquake was compiled by Anchorage resident John Shipman and contains letters written to Shipman and his family from concerned friends and relatives, photographs of damage around Anchorage, publications about the earthquake, and newspaper clippings relating to the military's role in the post-quake cleanup.

Benjamin B. Talley papers; 1925-2002.  HMC-0241.  Benjamin B. Talley (1903-1998) was an engineer and officer in the U.S. Army Corps of Engineers who supervised military construction in Alaska from 1940-1943. His papers contain include earthquake testimony from residents of Anchorage, Army and federal reports on the impact of the earthquake, and other materials.

Lyman and Betsy "Betzi" Woodman papers; 1929-1999.  HMC-0353.  Lyman L. Woodman (1913-1997) was a freelance writer and historian and his wife Betzi (1913-1990) was a newspaper writer. Their papers include materials on the earthquake, including correspondence, news releases from government agencies, newspaper clippings, publications, and copies of newspapers from Fairbanks, Anchorage, and Seattle.