This course guide will help you locate information in English and Spanish for your research project in Advanced Spanish.

This course guide provides an overview for using library resources and other recommended websites to locate information on the Spanish-speaking world, with a particular emphasis on human rights issues.

"The Universal Declaration of Human Rights (UDHR) is a milestone document in the history of human rights. Drafted by representatives with different legal and cultural backgrounds from all regions of the world, the Declaration was proclaimed by the United Nations General Assembly in Paris on 10 December 1948 (General Assembly resolution 217 A) as a common standard of achievements for all peoples and all nations. It sets out, for the first time, fundamental human rights to be universally protected and it has been translated into over 500 languages." 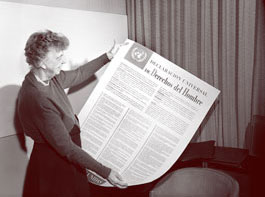 President and Chair of the Commission on Human Rights, Eleanor Roosevelt, looking at the Universal Declaration of Human Rights. Credit: UN Photo. 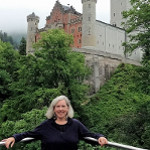